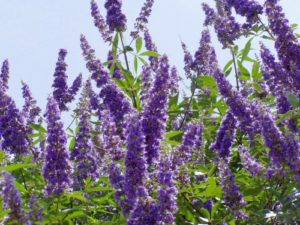 Randomized Clinical Trials (RCTs) are considered the highest form of scientific evidence.  A group of people with the same condition are divided into two groups, and randomly assigned to receive the medicine, ie Chasteberry, or a placebo.  Neither the patient nor the doctors know which group they are in until the results are assessed.

The following are RCTs in the National Library of Medicine listed when you search “Vitex Randomized Clinical Trial.”

Complement Ther Med Dec 2019.  Results: Chaste berry significantly decreased the symptoms of PMS compared to placebo. (1) (1a). Including the irritability, just as well as Prozac. (1b). Including insomnia. (1c). More Drs concluded the same. (1d) (1e)

Curr Drug Discov Technol 2020. Conclusion: Chaste/Mint/Fennel herbal tea is a safe, well-tolerated, and effective choice in inducing bleeding and maintaining regular bleeding in women with oligo/amenorrhea.  At the end of the treatment, there was a significant decrease in luteinizing hormone, total testosterone and free testosterone in patients taking Chaste, as well as a significant decrease in facial hair and acne. (2)

Arch Womens Ment Health Dec 2017.  Results: Chaste Berry extract is a safe and efficacious alternative to be considered for the treatment of PMS/PMDD symptoms. (4)

Am J Obstet Gynecol Aug 2017.  Results:  We found thirteen studies that reported positive effects of Vitex agnus castus on total premenstrual syndrome symptoms. Unfortunately most of the trials are associated with a high risk of bias. (5)

LOL.  Bias?  Like the love of Nature?  Dislike of the over use of pharmaceuticals and the criticism by the 3rd leading cause of death (Big Pharma) that plants are not scientific and potentially dangerous?  People can grow Chaste tree themselves and make tea or tinctures, so there can never be a financial conflict of interest.  Like God intended for Medicine.

J Obstet Gynecol Res Mar 2014.  Results: Chaste Berry worked just as well as Birth Control Pills to relieve symptoms in patients with severe primary dysmenorrhea. Primary dysmenorrhea is defined as cramping pain in the lower abdomen occurring just before or during menstruation, in the absence of other diseases such as endometriosis. (8)

LOL.  When a woman doesn’t want a man, they named it Female Sexual Dysfunction.  Hahahah.  But, it does happen with low estrogen in menopause too.

It sounds a bit like excitement, but they go on to say that they cannot extrapolate this data, helps alot with no side effects, onto a larger population.  So they need larger population studies before they can recommend this harmless plant.  LOL.  Zero recorded deaths in 3000 years, but proceed with caution.  It wasn’t made in a sterile lab.  Hmmm…

Gynecol Endocrinol Feb 2007.  Conclusion: True Menopause Ease is safe and effective for the relief of hot flushes and sleep disturbances in pre- and postmenopausal women, at least for 3 months’ use.  It relieved hot flashes by 73%, and nearly 50% of the women were completely resolved.  (11)

They didn’t actually use our product, but it was very close.  If you add a bit of our Fem Vitality, with features Chaste Berry, you would have all of what they used and more!

And seriously, if it worked for one person, and had no down side, why not try!?

I think the evidence supports the benefit to women at any age, to optimize hormones and feel Vital!  True Fem Vitality can be purchased in our store at Online Farmacy!