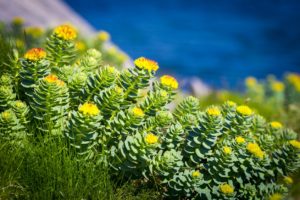 Randomized Clinical Trials (RCTs) are considered the highest form of scientific evidence.  A group of people with the same condition are divided into two groups, and randomly assigned to receive the medicine or a placebo.  Neither the patient nor the doctors know which group they are in until the results are assessed.

The following are RCTs in the National Library of Medicine listed when you search “Rhodiola double blind.”

Pharmaceuticals May 2020. Results: The menopause symptom relief effects of Rhodiola and Black Cohosh were significantly superior in all tests to the effects of Black Cohosh and placebo after their repeated administration for 6 and 12 weeks. (2)

Front Pharmacol Mar 2020.  Results: A total of 18 RCTs involving 1,679 patients were included in the meta-analysis. Adjuvant treatment with Rhodiola significantly decreased ≥80% reduction in the frequency of angina attacks. (3)

J Affect Disord Mar 2020. Conclusions: It is concluded that the Rhodiola capsule shows anti-depressive potency in patients with depression disorder. (4)

PLoS One Jun 2015.  Results: Rhodiola tended to protect against acute exacerbation of COPD and significantly improved tidal breathing and ventilation efficiency, in patients with COPD. (8)

Phytomedicine Mar 2015. Conclusions: Although R. rosea produced less antidepressant effect versus sertraline (Zoloft), it also resulted in significantly fewer adverse events and was better tolerated. These findings suggest that R. rosea, although less effective than sertraline, may possess a more favorable risk to benefit ratio for individuals with mild to moderate depression. (9)

Get True Stress Resilience and True Mood Lift, and I bet you experience more antidepressant effect than Zoloft.

Holistic Nurse Pract Ap 2014.  Results: Rhodiola rosea is found to be effective in the treatment of stress-related fatigue. (12)

Phytomedicine Jun 2010.  Results: Showed a significant difference in attention, speed, and accuracy  between the two treatment groups. The subjects in the Rhodiola/Eleuthero/Schizandra group quickly (two hours after ingestion) gained improved attention and increased speed and accuracy during stressful cognitive tasks, in comparison to placebo. There was also a tendency to reduce percentage of errors, which means better accuracy, quality of the work, and degree of care in the volunteers under stressful conditions. (14)

Phytotherapy Res Aug 2009.  Results: After supplementation, a significant decrease concerning the experienced level of fatigue in the Rhodiola group was observed compared with the placebo group. (15)